According to "Whois April.org", April is owned by Frederic Couchet of APRIL since 2016. April was registered with Public Interest Registry on December 16, 1996. Frederic Couchet resides in Paris, France and their email is afe8de3fdfb1b5bdc5ac6a26dc972c55-235505@contact.gandi.net.

The current April.org owner and other personalities/entities that used to own this domain in the past are listed below. 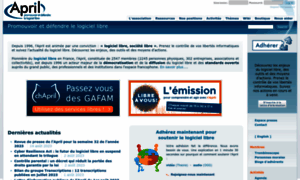 If you are April owner and would like to increase privacy protection level for your data - please, deal with Public Interest Registry which is your site’s registrar.